There have been bands in Delta for over 100 years. The archival record shows that a brass band existed in Ladner in 1889. Why would it be a brass band? Initially the brass horn was a tube of fixed length, which could sound a sequence of pitches but missed out tones in between. By changing the length of the tube, the missing pitches could be sounded but then other tones were now missed. Between 1815 and 1850 European instrument makers developed clusters of valves to shunt the vibrating air into additional tube lengths which were permanently connected to the horn. The basic design had 3 valves, which could be used in 6 combinations to allow the horn to play the chromatic scale (all the black and white keys on a piano) in the pitch range of the brass horn. By 1850 many instrument makers were building a wide variety of valved brass instruments, which had different fundamental pitches as well as a variety of tonality within each pitch family.

The brass band appealed to many communities in Europe and Eastern North America. At the time of Confederation in Canada with British Columbia (1871), most of the major townships in Eastern Canada had one or more brass bands. The movement then spread over to the newly settled Prairies and British Columbia.

How would a brass band begin in British Columbia? It usually started with an individual working with a committee, which funded the purchase of many instruments all at once. Then they would obtain an instructor to give group lessons over a number of years. Since all valved brass instruments fingered the notes in the same way, many new band members could learn to play and read music at the same time.

Sources indicate that in the period 1870 to 1900, many brass bands began in British Columbia and Washington State. The list includes Nanaimo, Victoria, New Westminster, Vancouver, Blaine, Ferndale, Lynden and Delta. A similar movement also occurred up the B.C. coast in a Finnish Colony at Sointula on Malcolm Island and also in First Nation communities spread about B.C.

In 1889, a committee known as the Delta Amateur Band organized and purchased instruments to form the Delta Brass Band, which existed to 1891. F. W. Harris was the bandleader and probably provided instruction. The Delta Amateur Band committee formulated precise regulations about fees, attendance to rehearsal, tardiness and reasonable progress on the instrument. Concerts were given, and yet the band dissolved. The funds and instruments from the Delta Brass Band were later transferred into the books of a new band called the Ladner Cornet Band in 1900. The Cornet Band hired several music instructors over the years. The band folded in 1912. Several members of the Ladner Cornet band had been members in the earlier Delta Brass Band. Both bands had uniforms (caps only for the Delta Brass Band) and received financial aid from the Delta Municipal government as well as private dollars during their time. 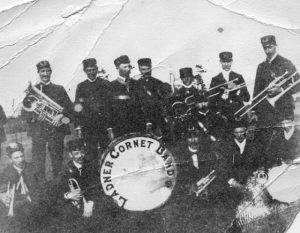 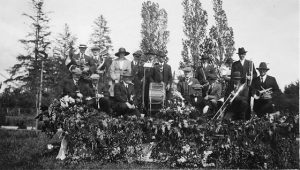 The Ladner Band of Business Men was a patriotic group dedicated to fund raising for troop support during the 1914 to 1918 war. Many younger musicians were not available during this time. Often called the Ladner Band in the press, it did not exist past 1920. They were known to have played May Day festivities in 1917 through 1920. Former musician members of this band appear in the later Crescent Island Band.

The Crescent Island Band appeared in the 1920’s under the direction of Fred Land, a former Ladner Cornet Band player. The group was known to have played at Ladner Memorial Park for May Days in the late 1920’s as well as for functions at the Crescent Island Baptist Church. The band size was approximately 20 male and female members. Members included Margaret Husband, Rena Husband, John Husband and Thomas Husband. Instruments played included reed instruments such as clarinet and perhaps saxophone. These trends continued in more recent bands. Crescent Island band’s last concert was in 1933. 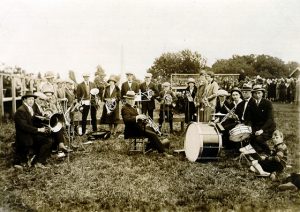 Around 1935, George Campbell, the principal of Ladner Central School, now part of Delta Secondary School in Ladner, organized a school band using a special Provincial Government Program Fund. This was likely the first public school band in Delta. Jack Peebles was the itinerant music instructor working schools in the Fraser Valley and visited the local band of approximately 35 student players once a week. Both brass and reed instruments were represented. Some of the children in this school band were the sons and daughters of players in the Crescent Island Band. The school band rehearsed on Monday evenings, however, beginners were taught at other times and then brought into the more experienced group. They had nicely tailored uniforms and marched in parades. The band had several different names in the community: Delta Junior Band, Ladner Community Band, and Ladner Marching Band. It is not clear which is the formal name. It is reported to have a few adults playing as well. 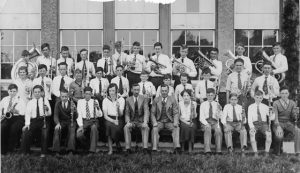 In the 1945, W.D.Brown, an experienced 70-year-old Saskatchewan musician moved to Ladner and later, in 1952, became the conductor of the Ladner (Community or Citizens?) Band, which continued to play until the early 1960’s. Some of the members played at the opening of the Massey tunnel in 1959. Pat Rogers, Delta Arts Council, tells us she was a guest vocalist with this band in the mid 1950’s. Her late father John Husband and grandfather Thomas Husband along with aunts Margaret and Rena Husband played in the earlier Crescent Island Band.

In 1959, Delta was linked by the Massey tunnel to Richmond and thus to Vancouver. A new Highway ran to the BC Ferries terminal in South Delta and thereby connected to Vancouver Island. Somewhat later the Highway 99 was extended/rerouted to the U.S. Border at Blaine, Washington. The communities of South Delta and North Delta grew quickly and became a source of more musicians. 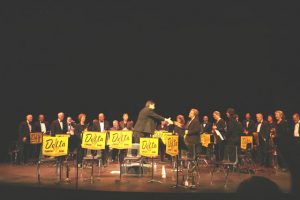 The Delta Community Band was organized in 1964 following the retirement of W.D Brown in 1959 or 1960. It was later renamed the Delta Concert Band. Edgar Dunning, Delta Optimist’s “Ramblin Reporter”Â, was part of the original committee. The Delta Concert Band obtained a few of the instruments and members from the defunct Ladner (Community) Band. The first concert under the direction of Milt Moller was in May 1965. Financial help in the form of a $400 grant came from the Delta Municipal Council May 1965. That year the band played May Day, Harvest Festival and the November 11 ceremonies at Memorial Park. The Rotary Club of Ladner helped finance concerts with the DCB and the school bands of Sunshine Hills Elementary School and North Delta Secondary. Dr. Ernest Dawson, music instructor of North Delta Secondary School conducted.

The Delta Community Band Society was incorporated under the Societies Act in 1967 to run the band’s financial affairs. Funding for the band came from annual membership fees and the band’s community bingo, which additionally was enough to support a junior band for a while as well as provide funding for the Delta Hospital.

Today membership in the Delta Concert Band includes enthusiastic skilled players from other regions of the Greater Vancouver District due to the improved transportation routes mentioned earlier. Some have traveled from Ferndale, Bellingham, Sechelt and Victoria! The Delta Concert Band can trace a direct connection (via instrument ownership and earlier band members) to the 1935 Ladner Central School Band. If the children of former band members are considered, the linkage is probably backed to the Delta Brass Band of 1889.

Delta Archives: various records dating as far back as 1889